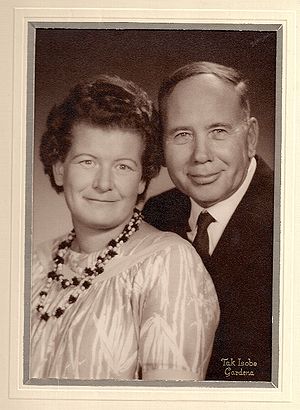 She wrote a letter to her grandmother while on her honeymoon with husband, William Leroy Oleson.

Evelyn was/is my mother's sister. She has quite an interesting love story in her life. She married a Carl Henry Peterson when she was young so she could escape a difficult home life. After having 3 children by him, they were divorced. She took work as a nurse to help support herself and her children.

While working as a nurse, one of her patients was Bill Oleson's parent (I don't remember if it was father or mother). She and Bill fell in love. However, Evelyn had been diagnosed with Cancer, so Evelyn didn't want to burden Bill with that. However, Bill convinced her to marry him. He wanted to care for her, and take responsibility for her children after she died. They married in April of 1961. The letter I sent in the other e-mail describes how happy she was in her new marriage. We all loved Uncle Bill - he was a terrific guy. Evelyn died 4 years after her marriage. Bill raised her sons and daughters and they adored him to the end.

I remember my cousins, Tommy and Lyn, quite well. Evelyn's daughter, Carolyn, died of breast cancer, as did her [Carolyn's] daughter Tammy. Fortunately that cancer hasn't shown up in our branch of the family.